Case Study: How The Puppini Sisters Raised £50,000 From Crowdfunding Their New Album 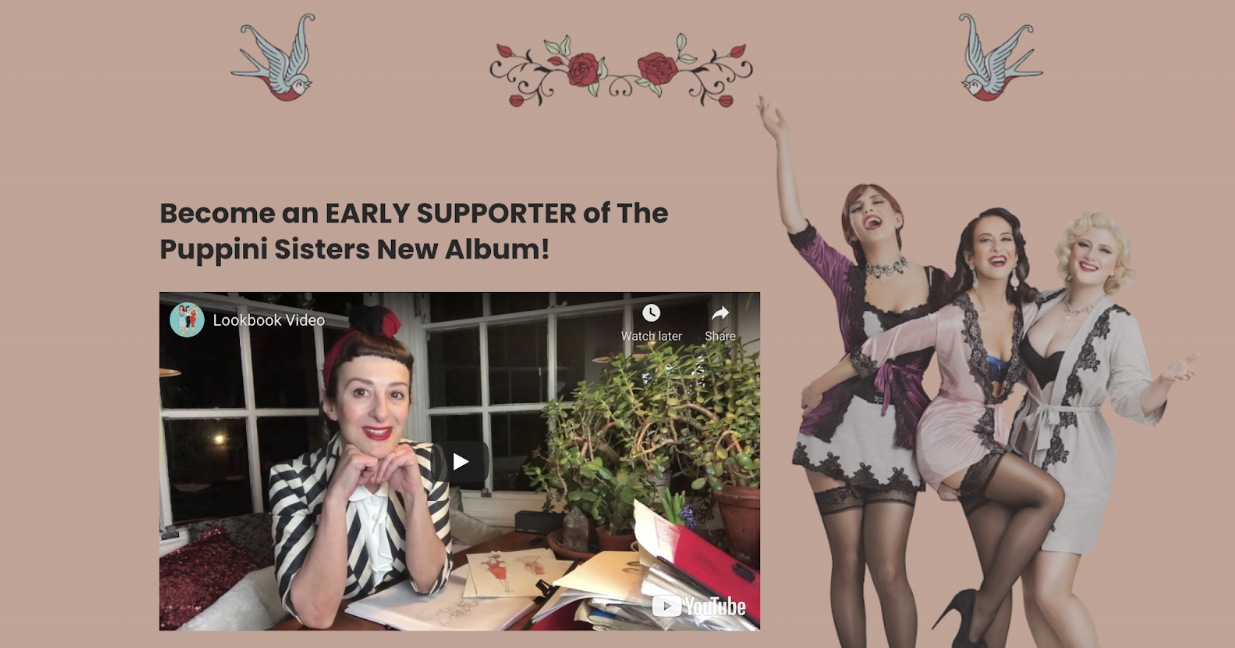 The Puppini Sisters are an English close harmony vocal trio.

In 2019 the group on-boarded to IndieX for marketing support around a crowdfunding campaign aimed at funding their upcoming album, “Dance Dance Dance”.

With previous successes in crowdfunding and an engaged base of fans and customers, The Puppini Sisters had a fundraising goal of £50,000.

In order to help the group reach their goal, IndieX implemented an extended promotional strategy executed via emails, social media, and advertising. The strategy included an early adopters phase and a main campaign consisting of numerous tiers and free surprises.

IndieX built out a custom crowdfunding tech stack through white label provider Thinacia to host the campaign. The custom built crowdfunding site was effective because it allowed the funding pages to be formatted exactly as The Puppini Sisters wanted while also allowing them to bypass the traditional revenue percentage share and time limitations imposed by other conventional platforms. The custom crowdfunding build ultimately put more money in The Puppini Sisters’ pocket! 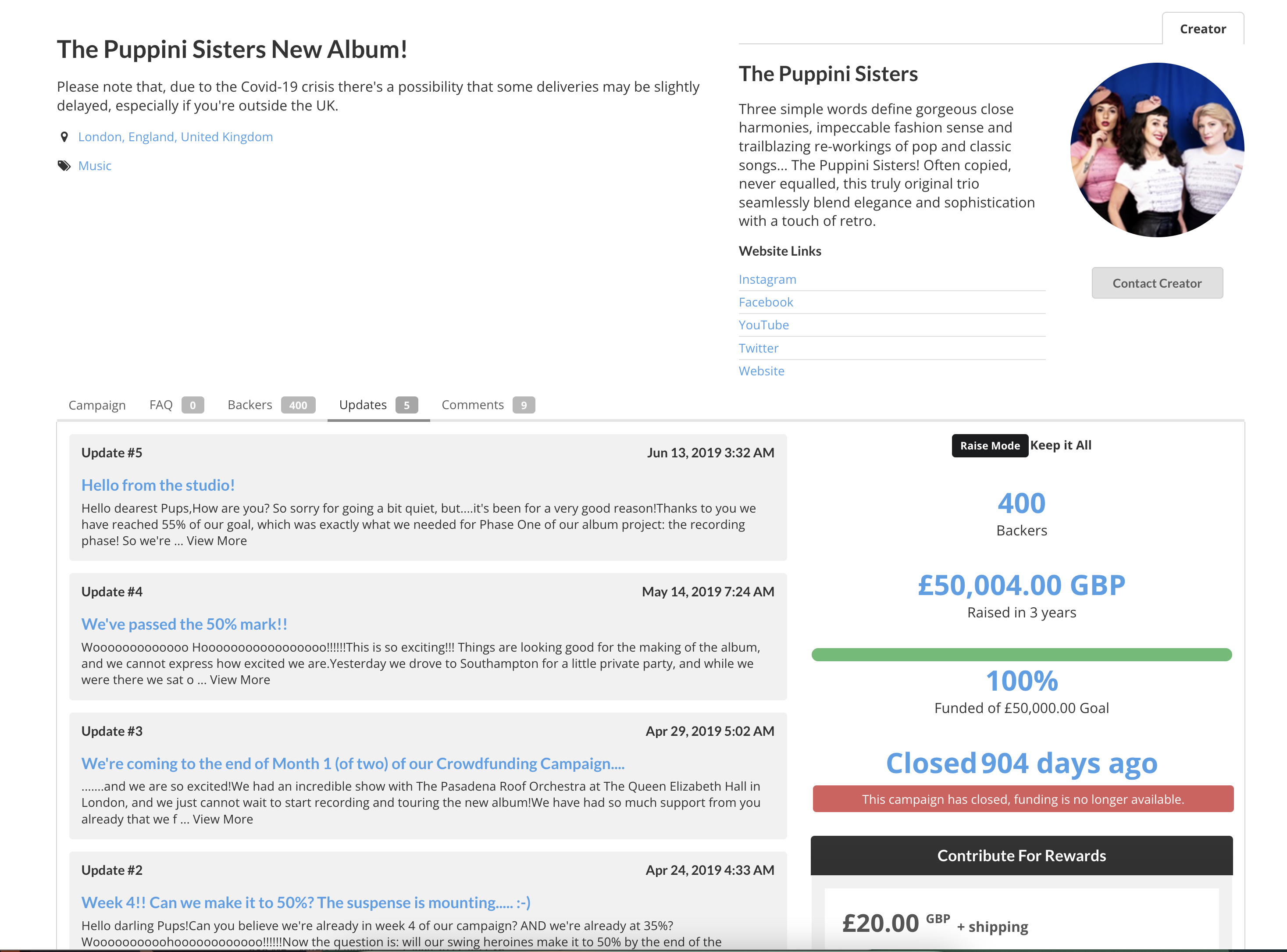 Our team worked with The Puppini Sisters to structure their crowdfunding efforts in across a number of phases:

In the pre-launch phase of the crowdfunding campaign, we worked with The Puppini Sisters to tap into their existing list of email subscribers to convert existing subscribers into first time customers with a Free + Shipping & Handling CD offer of the group’s previous album.

This was a great opportunity to convert non-customers into customers, create excitement leading up to the launch of the campaign for “Dance, Dance, Dance”, and position these new customers are prime candidates for the crowdfunding incentives that would be announced less than a month later.

Two weeks before the crowdfunding campaign went live, we launched an early adopter phase aimed specifically at getting existing fans and customers to “raise their hand” and promise to pledge in exchange for a free gift. In this case, we strategized with The Puppini Sisters on creating a custom hand-drawn Lookbook of artwork and visuals inspired by their brand.

The early adaptor rollout consisted primarily of email marketing campaigns to existing subscribers and lasted for a two week period. It had a custom landing page for easy sign up with a clear directive.

The early adopter phase was successful in generating a large group of fans agreeing to donate before the campaign was even live.

Once the early adopter phase was completed, The Puppini Sisters launched their crowdfunding campaign and moved into the main phase of the fundraising. The campaign relied on a coordinated and consistent approach of email marketing, organic social, livestreaming, and paid traffic. 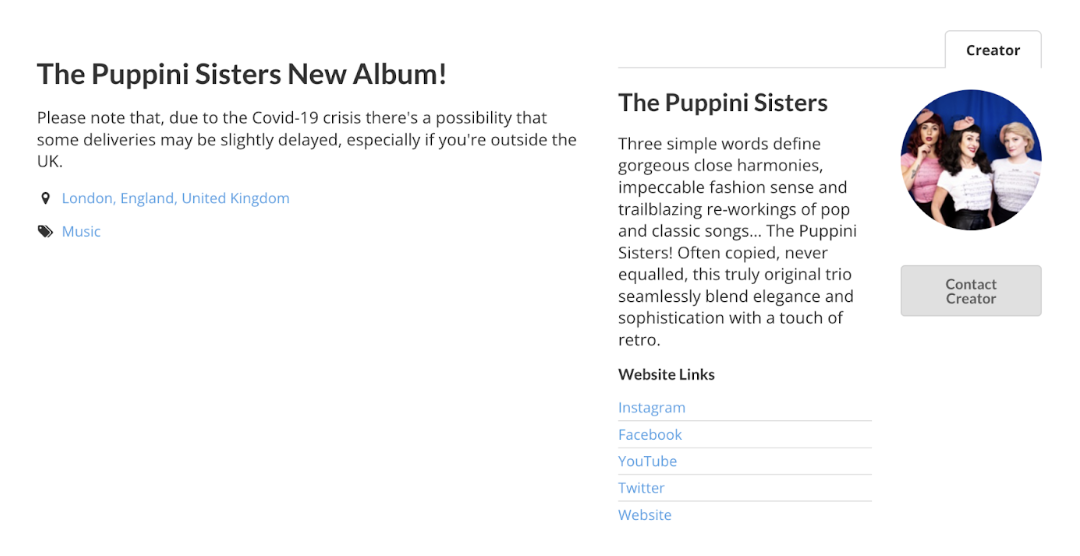 These perks were available for a limited time and were limited in quantity.

As time went on, and in order to keep things fresh for subscribers, we worked with the The Puppini Sisters to implement a series of free “flash” gifts. These gifts were only available for a week or two at a time and were received as a free gift with a donation over a varying threshold. These flash gifts included signed photos, lipstick kissed vinyl, and exclusive press pictures.

This was highly effective as on-the-fence supporters were incentivized to donate to receive the free gifts.

Finally, The Puppini Sisters used a number of incentive specific emails and secondary follow up emails to highlight specific tiers/offers for supporters including:

The emails were used to dive deeper into why the higher tier offers would be of interest and highlight the benefits and value.

In the Initial 2 Month Campaign Phase, The Puppini Sisters fans helped them raise £30,000 for “Dance, Dance, Dance”, topping their previous album’s crowdfunding efforts when considering funds raised over a short period of time.

After the initial 2 Month Campaign Phase, The Puppini Sisters were able to prioritize longevity and consistency in promoting their new album’s campaign thanks to the flexibility of the crowdfunding tech stack in place. Pushing through with their efforts to market these special offers to their fans, after a year the group ultimately hit their desired goal of £50,000! 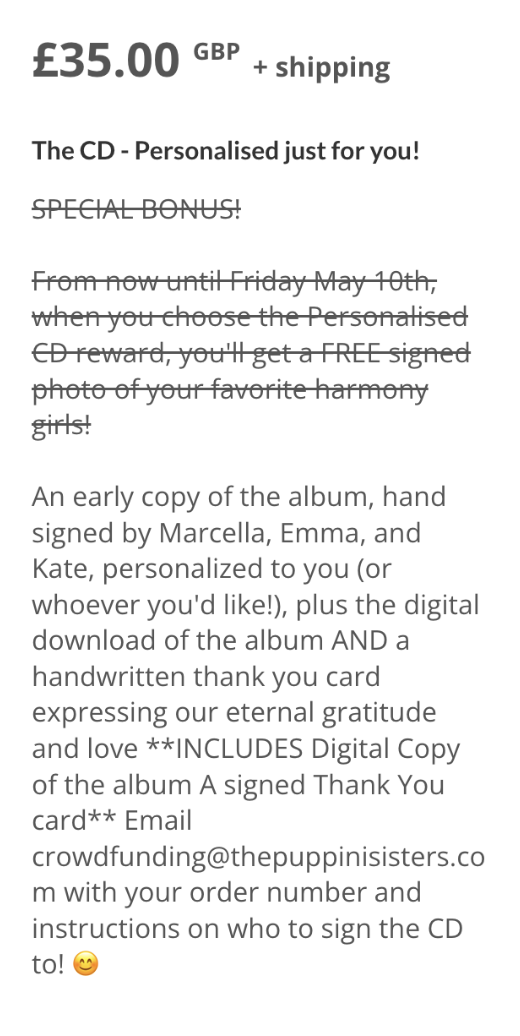